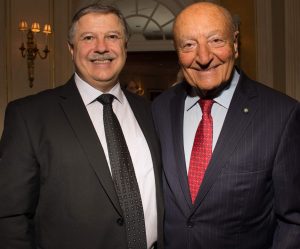 Subsequently, at the Gala Dinner held in the Grand Ballroom, journalists were able to taste—while pairing with high-quality dishes specially prepared by Executive Chef Andrew Burriesci to highlight the organoleptic characteristics of the wines—the MarchesiAntinori, Tenuta Guado al Tasso Vermentino 2016; the Planeta, Santa Cecilia, Noto DOC 2010; the Col d’Orcia, Brunello di Montalcino DOCG 2013; the Travaglini, Gattinara Riserva DOCG 2011; the Lungarotti, Torgiano Rosso Vigna Monticchio, Rubesco Riserva DOCG 2009; the Sella e Mosca, Marchese di Villamarina DOC 2010 and the Castello di Querceto, IGT la Corte 2007.
The Guest of Honor of GALA ITALIA, which for 33 years has celebrated and promoted high-quality Italian wine and food, was Ambassador Sebastiano Cardi, Permanent Representative of the United Nations. Ambassador Cardi was the organizer, together with the President of the Italian Wine & Food Institute, Lucio Caputo, of the prestigious presentation at the United Nations.
During the Gala, the participating wineries were bestowed the Wine Leader Awards for their contribution to the image and prestige of the great Italian wine in the world and for taking part in the historic presentation to the United Nations Security Council. The distinguished and coveted awards of the Italian Wine & Food Institute were presented by Ambassador Cardi. While bestowing the award, the ambassador received the congratulations of all the winners. In particular, Alessia Antinori, Cinzia Travaglini and Alessandro François (Castello di Querceto) highlighted the importance of carrying out initiatives that contribute to improving and maintaining the prestige of Italian wines at the same high level that was achieved at the United Nations.
Ambassador Cardi was in turn awarded with the Italian Wine & Food Institute Special Award of Merit in recognition and appreciation for his constant and considerable contribution to Italian wine and for the unprecedented presentation of the selection of great Italian wines to the members of the UN Security Council. 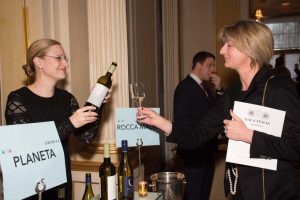 The president of the Institute then presented the Italian Wine & Food Institute Special Award to the Italian Trade Commissioner, Maurizio Forte. The award, underlined Caputo, signifies encouragement for the next promotional campaign in favor of Italian wines that will be conducted in the United States in the period 2018 – 2020 with the aim of further improving the knowledge of American consumers on Italian wines.
For his part, Forte said he was pleased to have been part of the 33rd edition of GALA ITALIA that celebrates Italian wine and food: “It was a great honor to receive an award, which we see as encouragement to continue our efforts. The event was an appropriate setting for the launch of the Italian Wine Project USA and the associated promotional campaign — also announced the next day in Rome on the occasion of the Vinitaly 2018 press conference — which aims to elevate the image of Italian wine in the US in support of Italy’s vibrant wine culture and its wineries.”
Continuing its 33-year long tradition, GALA ITALIA was once again the meeting point for the most qualified American press and the best Italian wine in the U.S. During GALA ITALIA, an exceptional selection of special vintage Italian wines was presented to the media, thus giving a notable contribution to the success, the prestige and the image of Italian quality wine and to Made in Italy as a whole.
Present with their Food & Wine Editors were all the most significant and qualified newspapers and magazines in the sector: from Wine Spectator to Wine Enthusiast, from Bon Appetit to Wine & Spirits Magazine, from Forbes to Newsweek, from Hearst Magazines to Food & Vine Country, from Dessert Magazine to Beverage Media, from the New York Times to Town & Country and to the famous British newspaper The Guardian, as well as various news agencies, television stations, and correspondents of the main Italian newspapers.
Among the notable personalities also present were Dolores Alfieri representing Governor Andrew Cuomo, various diplomats and Italian representatives. Mayor Bill Di Blasio, who was unable to attend the event due to previous engagements, sent a warm congratulatory letter that was published in the Gala program, in which he wrote: “I applaud the Institute that since 1983 has been guided by its mission to educate American consumers about the many high-quality wines and food products that boast the Made in Italystamp.”
Among the personalities, Italian and American, awarded in the most recent editions of GALA ITALIA: Piero Antinori, Jacopo Biondi Santi, Pio Boffa (Pio Cesare), Matteo Lunelli (Ferrari), Chiara Lungarotti, Lucio Tasca, Sirio Maccioni, Gualtiero Marchesi, Giovanni Rana, Fabio Granato, Vittorio Assaf, Piero Selvaggio, Adam Strum, editor and director of Wine Enthusiast; John Mariani, journalist and author of highly successful books, (including “How Italian Food Conquered the World”); Florence Fabricant, journalist of the New York Times and icon of American journalism, Joshua Greene, Editor of Wine & Spirits Magazine, Mary Ewing-Mulligan MW, director of the International Wine Center, Kevin Zraly, Author and Wine Educator at Windows on the World Wine School and Marc D. Taub, President and CEO of Palm Bay International.
An elegant, colorful catalog was specially prepared for GALA ITALIA, in which ample space and emphasis were given to all the wines and participating companies. Over 2,000 copies of the catalog were distributed to all the guests present and then sent to the main operators in the wine and food industry.
GALA ITALIA was organized by the Italian Wine & Food Institute with the support of the Ministry of Economic Development, in collaboration with the ICE-Italian Trade Commission.