Coming to Agora Gallery this July is the exhibition Enigmatic Visions featuring the artist Antonio Biagiotti. The exhibition opens July 28, 2017 and runs through August 17, 2017 with an opening reception on Thursday, August 3 from 6-8 pm. Entrance is free.

The photographic work of Italian artist Antonio Biagiotti is as compelling in its symbolism and meaning as it is stunning in its deceptive simplicity. Biagiotti is a master of light and is able to achieve the perfect balance between illumination and shadow again and again, offering up images so crisp, clear, and infused with 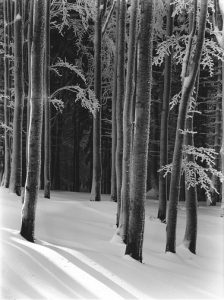 detail that the viewer is transported to a whole new world of line and form. Equally impressive is Biagiotti’s use of composition. He creates just the right amount of tension to hold the viewer’s interest while inserting new meaning into ordinary subjects, landscapes, and urbanscapes.

Biagiotti’s work stands out in today’s digital world as his photographs are taken and processed in a traditional manner – the artist works with black and white film which gets developed and printed in his darkroom. As Biagiotti explains, each image isn’t edited on a computer but rather “the light has simply impressed, for a moment, the film exposed by me.”

Antonio Biagiotti currently lives and works in Castel di Casio, in the province of Bologna, Italy.