Warning: "continue" targeting switch is equivalent to "break". Did you mean to use "continue 2"? in /homepages/36/d293910400/htdocs/italianamericansnews/wp-content/plugins/jetpack/_inc/lib/class.media-summary.php on line 87
 A tribute to Alessandro de Maigret at the Embassy of Italy in Washington D.C., to honor the work of archeologists in areas of crisis. | Italian American News

Washington DC, April 7 2016 – What can be done in areas of conflict to save cultural heritage and make it relevant to our present cultural identity? On April 11, 2016 the Embassy of Italy and the Italian Cultural Institute in Washington D.C. will host a panel discussion, and exhibition opening, on the work of international archaeologists in Yemen. The event is part of the “Protecting our Heritage” series of events, launched by the Washington chapter of the network of the European National Institutes of Culture (EUNIC Washington DC), supported by UNESCO. The initiative will be a tribute to the work of Alessandro de Maigret, a prominent Italian archaeologist who was a pioneer in coordinating the Italian archaeological mission in Yemen since its inception in 1980.

The event will also inaugurate the photographic exhibition “South Arabia Revisited: The Work of the Italian Archaeological Mission in Yemen”, which will highlight stories from the field, and collaborative efforts. Showcased archival documents, photographs, notebooks and drawings are the legacies of archaeological fieldwork, documentation and restoration at important archaeological sites like Barāqish and Tamnaʿ.

“This is the eighth event of the ‘Protecting our Heritage’ series, a program that we launched with two main goals in mind: to raise public awareness on the need to protect our heritage, and to reinforce the network of different organizations working to preserve it for future generations,” said the Ambassador of Italy to the U.S. Armando Varricchio. “In particular, this event will focus on what it means to work in a difficult context, which requires not only a high level of expertise, but also powerful diplomatic skills. Archaeologists in such areas must understand the past, but also the present, and be able to mediate between different conditions and actors. Their goal is to work for the future.”

The Italian Archaeological Mission in Yemen was launched in 1980. Its Director, Alessandro de Maigret, set out to investigate the ancient peoples and cultures of Southern Arabia who lived before the first millennium B.C., and to establish a reliable archaeological chronology for this historical period. The Director developed a new basis for documentary evidence that was multidisciplinary in nature and which could be used as a comparison with previous data – mostly inferred from inscriptions. Created with the patronage of the Istituto per l’Oriente in Rome, with support from the Italian Ministry of Foreign Affairs, the Italian Archaeological Mission envisioned and organized a remarkable series of systematic fieldwork and restoration projects. In partnership with scholars and members from the Ministry of Culture, the Ministry of Planning and International Cooperation, and the General Organization of Antiquities and Museums in Yemen, Italian archaeologists and restorers have since made groundbreaking contributions and helped to refine our understanding Yemen’s history, and to recreate some of its marvelous architectural wonders dating from both pre-Islamic and Islamic cultures.

Yemen’s vast and beautiful cultural landscapes are inscribed on the World Heritage List, and there are many people who care for them throughout the world. In peaceful times, Italian and Yemeni colleagues have produced a considerable wealth of information through collaborative efforts and research. Although the current political situation does not allow for actual field research, the Italian Mission has maintained its vigorous commitment to protecting Archaeological Heritage in Yemen through the Monumenta Orientalia program.

Iris Gerlach has been head of the Sanaa (Yemen) branch of the Orient Department at the German Archaeological Institute since 2000. Director of various archaeological projects in Yemen, Ethiopia and Qatar, her research interests are South Arabian and pre-Aksumite archaeology; cultural contacts, especially trade and migration; temples and religion; ancient water management; burial rites; and art history. She heads restoration and capacity building projects in Yemen and Ethiopia. In 2011, she became director of monitoring and awareness-raising projects dealing with the looting of museums, illegal excavations of archaeological sites and destruction of cultural heritage in Yemen.

Michael Harrower is an Assistant Professor of Archaeology in the Department of Near Eastern Studies at Johns Hopkins University. His research, including fieldwork from 2000 to 2008 in Yemen, concentrates on long-term histories from the beginnings of agriculture through the rise of ancient states across Southern Arabia and the Horn of Africa. His current fieldwork in Oman and Ethiopia integrates research into long-term water histories of early civilizations using a combination of archaeological survey (exploration) and satellite imagery analysis.

Alexander Nagel is a Research Associate at the Smithsonian Institution’s National Museum of Natural History. Originally from Berlin, Germany, Nagel received an MA from Humboldt University Berlin in 2003, and a PhD from the University of Michigan in Ann Arbor in 2010. He has worked on the site of Persepolis in Iran, curated a number of exhibitions on ancient Near Eastern art and archaeology in Washington, DC, and is supporting the work of communities who document heritage and preservation of sites in Yemen, Greece, Iran and the Middle East. 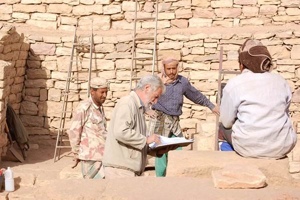