Warning: "continue" targeting switch is equivalent to "break". Did you mean to use "continue 2"? in /homepages/36/d293910400/htdocs/italianamericansnews/wp-content/plugins/jetpack/_inc/lib/class.media-summary.php on line 87
 NIAF Mourns the Passing of Supreme Court Justice Antonin Scalia | Italian American News

(Washington, D.C.– February 13, 2016) “On behalf of the National Italian American Foundation (NIAF) Board of Directors, we are deeply saddened by the passing of the United States Supreme Court Justice Antonin Scalia. We extend our heartfelt condolences to the Scalia family. Justice Scalia died at the age of 79 on February 12, 2016, in his sleep after a day of quail hunting at Cibolo Creek Ranch outside of Marfa, Texas. 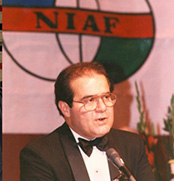 According to Joseph Del Raso, “I am personally heartbroken over this loss. Justice Scalia was not only the most respected member of the Italian American community having been the first Italian American Justice nominated and confirmed to the Supreme Court, but he was also a true friend and respected scholar. He was always there for our community, and participated at so many NIAF-sponsored events. On a personal note, I will always cherish the memories of spending time with he and his wife, Maureen, here in the United States and during our trips to Italy together.”

“His indelible legacy will be long remembered with great affection and admiration.”