Michael Barone, senior political analyst for the Washington Examiner and resident fellow at American Enterprise Institute, will be the keynote speaker at the NIAF Frank J. Guarini Public Policy Luncheon Series. Barone is also the principal co-author of “The Almanac of American Politics,” (22nd edition released in August), and author of “Shaping Our Nation, How Surges of Migration Transformed America and Its Politics.” (Crown Forum; October 2013). 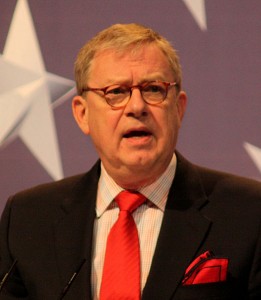 During the private luncheon, Barone will be speaking about immigration to an audience of 100 people including U.S. members of Congress, administration and government officials, business and community leaders, media and other notables.

In the 1980s, Barone served as a member of the editorial page staff of The Washington Post. From 1989 to 1996, and again from 1998 to 2009, he was a senior writer with U.S. News & World Report. He served as a senior staff editor at Reader’s Digest from 1996 to 1998. He has written for many other publications in the United States and several other countries, including the Economist, the Times Literary Supplement and the Daily Telegraph and the Sunday Times of London. His column is syndicated by Creators Syndicate. He received the Bradley Prize from the Lynde and Harry Bradley Foundation in 2010, the Barbara Olsen Award from The American Spectator in 2006 and the Carey McWilliams Award from the American Political Science Association in 1992. He has traveled to all 50 states and all 435 congressional districts, as well as to 54 foreign countries, and has reported on recent elections in Britain, Italy, Russia and Mexico.