As explained by Foreign Trade Institute (ICE) President Umberto Vattani, “there will be 44 companies, research center and scitech parks participating in the schedule of meetings in the framework of the project to develop the biotech sector funded by the Ministry for Economic Development in collaboration with Federchimica-Assiobiotec under the Working Group coordinated by the National Commission on Biosecurity, Biotechnology and Life Sciences at the Prime Minister’s Office.

The Italian regions represented in Washington (Lombardy, Sardinia, and Tuscany) will have an important role in the various sectors: “from oncology to agro, from cosmetics to biomedicine, molecular diagnostics, and innovative drugs to cure rare or up to now untreatable diseases.” A jumbo screen in the Italian pavilion will boast a virtual catalog of Italy’s most innovative companies, while Ernst&Young-Assobiotec-Farmindustria-ICE will introduce the 2011 Report on biotech in Italy and the new web portal  www.biotechinitaly.com. Italy’s biotech industry is growing both in size and competitively. With 375 companies, Italy is third in Europe in number of firms: 246 operate in red biotech (pharmaceuticals and medicine), 49 in green biotech (agroalimentary), and 21 in
white biotech (environmental and industrial).

On the occasion of BIO 2011, Italy’s Assobiotech and the Pennsylvania Biotechnology 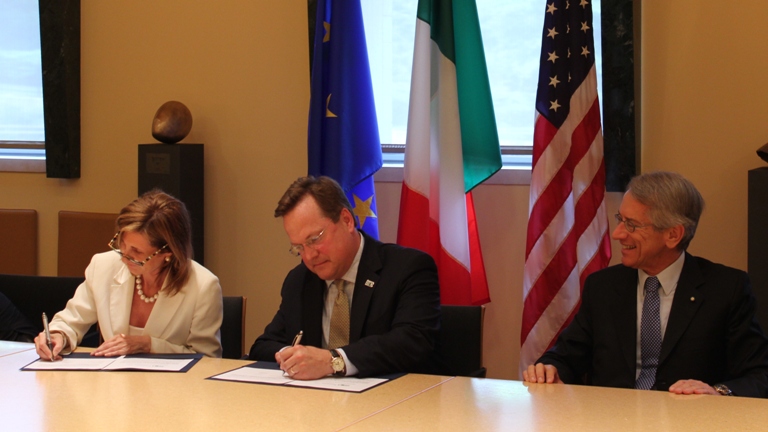 Center will sign, with Ambassador of Italy to Washington Giulio Terzi in attendance, the “biobridge” agreement to promote, among other things, bilateral collaboration programs in research. As Amb. Terzi explains, “the agreement is fruit of very similar experiences” and “the billings of the 622 U.S. companies quoted on the Exchange are growing at a pace very similar to those of Italian companies” with an increase of 8% from 2009 to 2010 (from $78 to $84.6 billion).

Among the side events of the meeting in Washington, ICE will host a roundtable at the
Embassy of Italy between U.S. and Italian operators and academics moderated by
Mark Thrusheim of MIT. The BIO 2010 in Chicago had 1,700 exhibitors and 15,500
visitors from 65 countries and 49 U.S. states.